I was driving home today day, and I saw something shiny in the road. I drove past it but something said to me "That is an iPhone."  My cousin had recently had her lost phone returned to her by a stranger.  She had lost it along with her drivers license, and the kind guy had called all the Dances in the phone book in the city listed on her license.  I figured karma was calling my name, so I turned around and sure enough it was a lost iPhone. The screen was pretty much shattered, just like my cousins phone had been.  Unfortunately I didn't have a drivers license to get a name from.

I pressed the power button and the screen lit up, blank white.  I figured that was pretty much a miracle.  I know it would be on the slide to unlock screen so I tried to gently slide my finger across the shattered glass to unlock it without slicing my finger open.  No luck.  I then tried to hold down the home button to get voice control.  I figured I could tell it to "Call Home" or something, but no luck.  Maybe she didn't have it activated.
Next step, was I took the iPhone home and plugged it into my Mac.  Amazingly enough it made the sync noise and iTunes popped up with "Lindy's iPhone" in the sidebar.  I could only see the music she had on her phone from iTunes but I knew that if I could sync it to the computer I could get the some contact info.  However, I didn't want to override all my info on my Mac with her's. 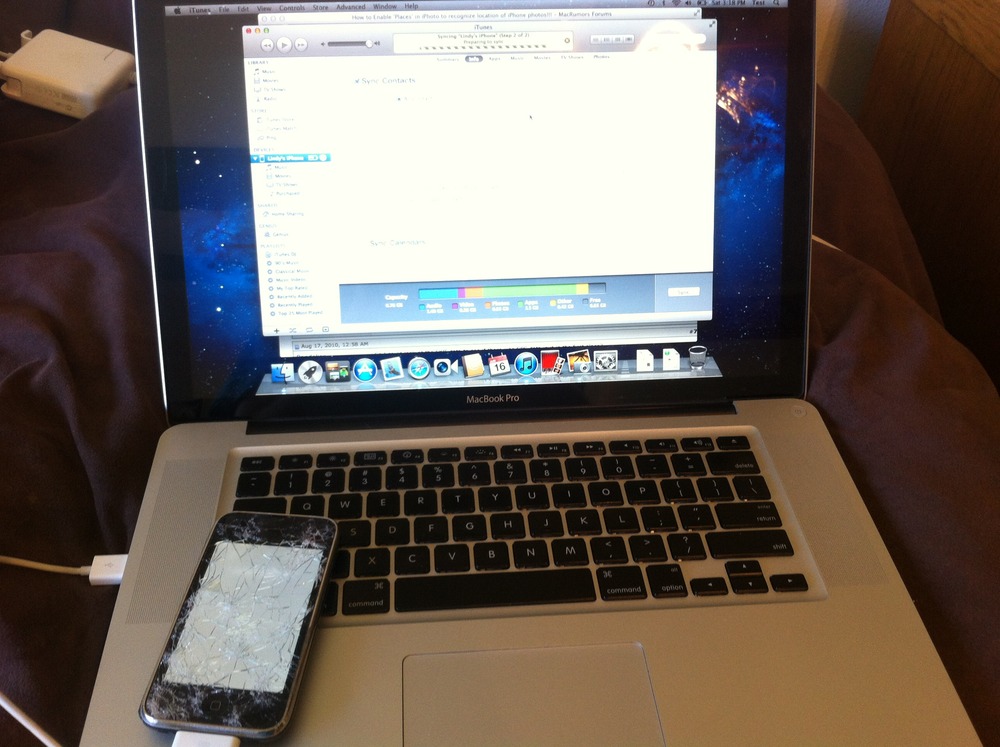 I quickly made a new user on my computer, logged in, and synced the phone up.  I was worried she wouldn't have, or I wouldn't be able to get the contact info so while it was syncing I opened up iPhoto.  I figured I could use the geolocation of photos to find a "home base".  No such luck, she didn't have her iPhone recording photo locations.
Luckily the addresses book synced without problems and she had a Mom and a Dad contact so I called her Dad and said, "This is a random call, but do you have a daughter named Lindy? I have her phone."

Turns out she lived a block from where I found the phone.  I drove over there, she wasn't there, so I left the phone in her porch mailbox with a note.
And that I how you return a lost iPhone when the screen is smashed.

One thought on “How to Return a Lost iPhone, or How I found the owner of a smashed iPhone.”